For more go to: www.cybersecuritycareeradvisor.com 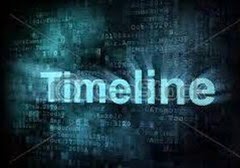 Triggering Events Timeline Which Led Me To My Career In Cybersecurity

I did not wake up one day and decide on becoming a Cybersecurity professional. A series of events led me down the path to going in a new direction and not touching or configuring technology anymore. Before becoming a cybersecurity professional, I was a Sr. Systems Server Engineer for a very large financial institution. The entire division of System Engineers and myself spent hours walking around data centers with a CD of tools for the purpose of removing viruses and installing virus software on servers to protect them from another attack. In addition to removing viruses, we also were spending a lot of time making changes to the registry of Windows systems to comply I with federal regulations regarding protecting customer data and privacy. The following sequence of events caused me to think critically and I had my “ah ha” moment: I said to myself: “Protecting systems from attack, data from being stolen and preserving customer privacy.”

GLBA compliance is mandatory; whether a financial institution discloses nonpublic information or not, there must be a policy in place to protect the information from foreseeable threats in security and data integrity.

Major components put into place to govern the collection, disclosure, and protection of consumers’ nonpublic personal information; or personally identifiable information include:

Technorati Tags: cybersecurity,careers,career,job,jobs,windows,linux,black,african,american,regulations,laws,data,privacy,protect
Posted by Unknown at 12:00 AM No comments:

How Learning Technology Changed Everything For Me 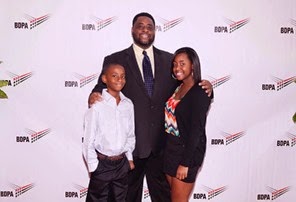 I was born in Boston, Massachusetts to parents who worked in the fields of South Georgia. They got married, moved to Boston and raised two boys in hopes to offer them a better life. I always wanted to know how things worked like TVs, Radios and my toys; took them apart and sometimes could put them back together. I was shy and found it difficult sometimes to fit in, because I had a huge imagination. I enjoyed science fiction and super heroes. You would always find me in front of the TV on Saturday mornings watching the Super Friends and up late in the evening watching shows like Star Trek, Space 1999 and Battlestar Galactica. Science kept me fascinated about this awesome world I lived in and offered me an escape. But growing up in poverty and with a father who could not read or write; he was forced to work on farms to help feed his brothers and sisters, a mother who was in the beginning stages of schizophrenia and with me being born with Sickle Cell Anemia would make me face the reality of pain and hardship every day. Despite these challenges my parents raised my brother and I with lots of love and always told us that hard work would give us a better life. I grew up fixing things for my friends and broken items around the house. I thrived in middle and high school shop classes that offered exploratory careers in carpentry, machining and electrical/ electronics. But in 1984 I had a teacher named William McGuire who was working on a Master’s Thesis to prove that you could teach urban high school students college programming. I was part of only a handful of students who were interested in his course; he changed the trajectory of my life. Mr. McGuire challenged me, he pushed me, and he constantly told me that I can do this. I was an inner city youth writing code before writing code was cool in the 80s; programming languages: BASIC and Turbo Pascal. I still remember the problem he gave to us, where we had to write a program that initiated the countdown sequence to launch the space shuttle. It was the most challenging thing I ever worked on. We learned team work and successfully designed the program to Mr. McGuire's problem.

Mr. McGuire succeeded in building my confidence, so much so that I had the audacity to go to college and earn a BS degree in Electronic Engineering. Mr. McGuire was an integral facet of my life. He was an inspiring mentor to me. As a result of what this teacher exposed me to, I have been able to work with scientists who have items they made that were left on the moon, scientists who researched and developed the energy system for the Voyager satellite space program, successfully implemented a computer network and data center for an online start-up, designing engineering drawings for a biomedical company. Now I provide cybersecurity for one of the largest financial institutions in America. In addition, I learned from Mr. McGuire how to give back to my community. Since 2001 I have had a parallel career as a community activist who has helped underrepresented minorities pursue careers in technology. Currently I am the Chief Information Officer for the National Black Data Processing Associates (BDPA) and board member for CompTIA's Creating IT Futures Foundation. Mr. McGuire's innovative learning environment has paid off and keeps giving. I have been able to help mentor and influence hundreds of individuals pursue careers in IT. Additionally, as a positive influence to my younger brother he obtained a degree in Computer Science and works for an Ivy league college as a technologist; he told me that he had to keep up and could not let big brother out do him. Giving back has been rewarding to me on so many levels.

I feel that this is my life's purpose. It’s easy to be kind to others when you know pain and hardship.

I updated my iPad 2 to IOS version 8.1.3 and I wish I didn’t. The iPad 2 now runs really slow now. Sometimes it’s not even worth using it.

Note; Apple no longer allows you to downgrade back to IOS 7.

Posted by Unknown at 7:50 PM No comments:

Prime Minister Netenyahu gave a compelling speech on Cybersecurity today. In addition, he is an excellent global spokes person on the need for protecting Cyber Space for everyone. I extracted a portion of his speech that really hit home with me, and I think it will hit home with others as well.

One thing that is for certain, Cyber Security is everyone’s business and will offer a bounty of career opportunities.

The Hacker Group Anonymous and the Ferguson, MO Police Shooting 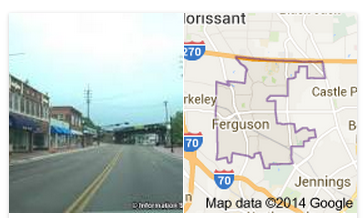 I can't support what Anonymous is doing with their Robin Hood hacker tactics. First, I am an ISC2 Certified Information Systems Security Professional (CISSP), and by ISC2 ethical standards I can't support the intentional violation of Confidentially, Integrity and Availability of computer networks. Second, Anonymous runs the chance of severely interfering with Justice being served; regardless of how noble their intentions might seem at times. Case and point, they released to the public the wrong name of a police officer who was not involved with the Michael Brown killing. Remember, we want justice, not revenge.

Julius, CISSP, CISA
Posted by Unknown at 9:38 PM No comments: 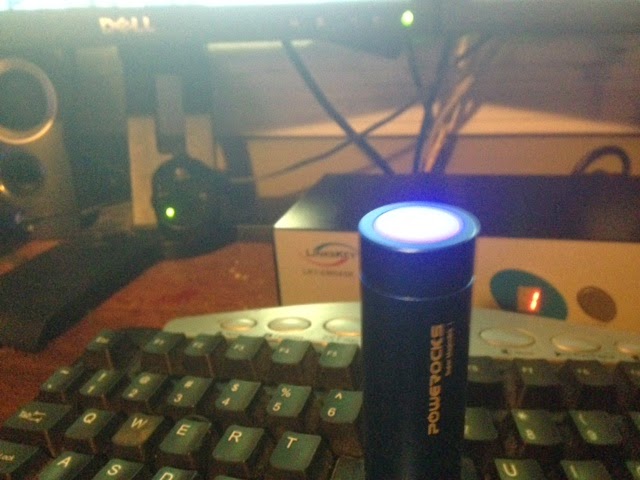 A few months ago I was asked by the company PowerRocks to evaluate the Magicstick device. They make portable and reliable mobile device charging solutions for mobile devices, and they asked me to do a review of their product on the Clark Thought Leadership Blog and I agreed. They quickly sent me a sample to review and I immediately took it out of its packaging, connected the UBS connector that came with it to my computer and the other end to the micro port and charged it overnight. See above. The PowerRocks charging device takes 5-6 hours to fully charge up when empty.


First, I must say that the Magicstick device is very nice and sleek looking product. They sent me a blue one with a cool metal painted finish. It will definitely create conversations every time you take it out. See below. 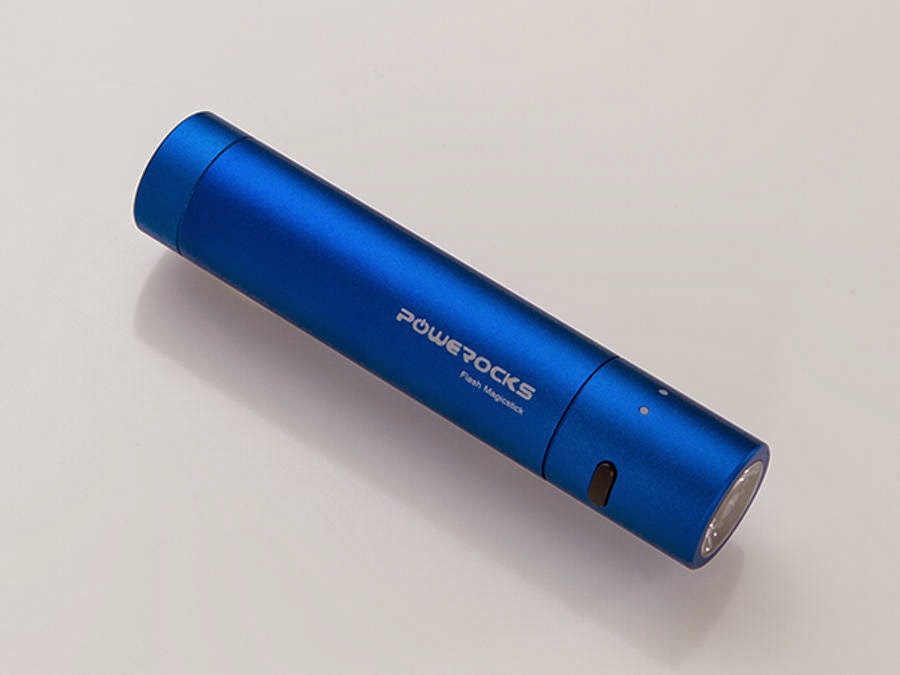 The Powerocks Magicstick comes in the following colors. 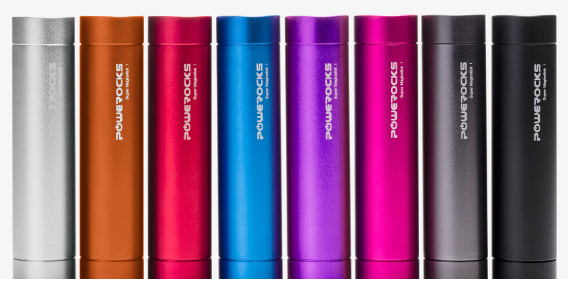 I use an iPhone 5s and I am a heavy app user which results in my phone’s battery draining too fast. By using the PowerRocks device I am able to recharge my smartphone whenever I need to without worrying about finding an electrical outlet. The powerocks device fully charged my iPhone in about 2/5 hours. You will be able to get close to 2 full charges from a fully charged Powerocks device. Not bad at all.

On one end of the Magicstick device there is a Smart push-button LED indicator button that when pressed will let you know who much charging ability is available in the Magicstick. Below the LED is showing a blue light which indicates that the battery has a 70% - 100% charge. 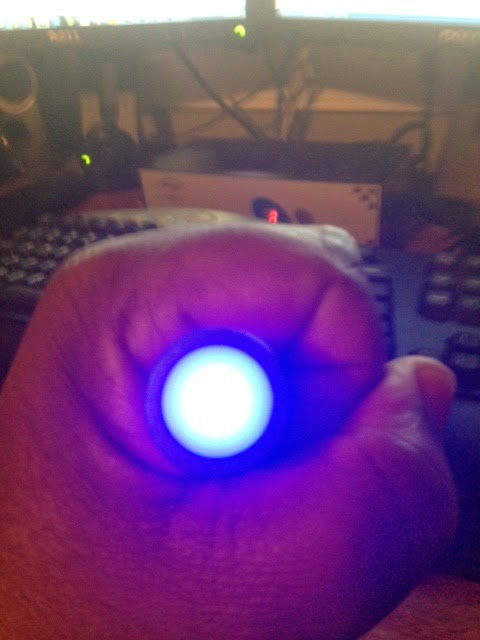 So while I was testing the Powerocks Magic stick my beautiful daughter came over to me and said, "daddy with is that?" I told her that it is a device that recharges mobile devices without having to be plugged in to an outlet. She immediately said, "wow day I can use that while at school! It is very difficult trying to recharge my phone during the dat at school." I initially said no, but as I thought about it and being the IT Security person that I am, I soon realized that the Magicstick would reduce the likelihood that my daughters' Android phone would be stolen, because instead of her plugging up her smartphone in an outlet at school where she would not be able to keep her eyes on it all the time, she could use the Powerocks Magicstick and charge her phone while it is in her book bag and not draw any attention to it. Additionally, it will allow her to focus on her school work and not worry about someone eyeing a charging phone and walking off with it while it is charging; sometimes she said she has charged her phone in empty classrooms and tried her best to hide it; not good at all! 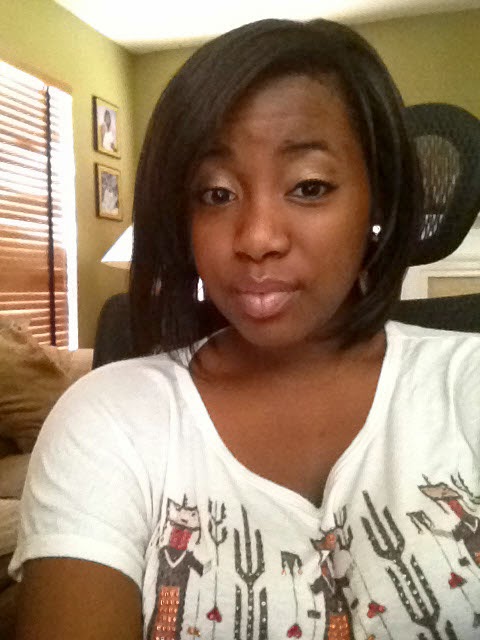 You can find Magicstick portable recharging batteries for under $30. I think they make the perfect gift for individuals who have everything. Power for mobile devices is now a commodity and everyone needs access to power to stay connected to family, friends and work; especially in emergency situations.

I think that the Powerocks Magicstick is a great product that is affordable and one that will see use over and over by the recipient of it. I high recommend the product. 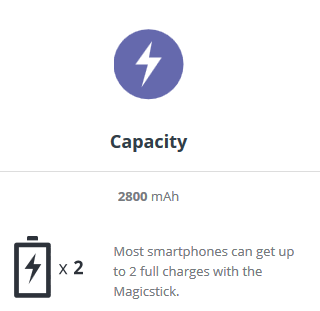 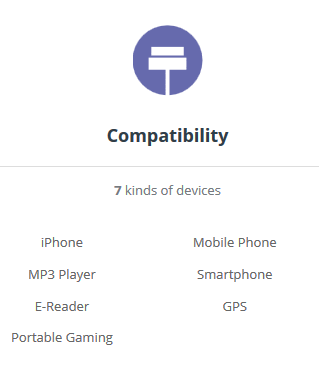 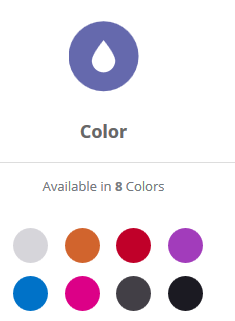 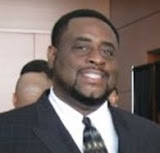